A LaMothe Book Review: The White Horse King, The Life of Alfred the Great 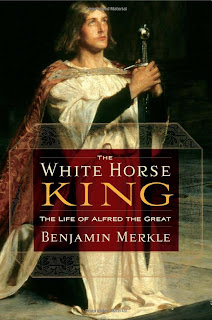 The White Horse King, The Life of Alfred the Great was a historical non-fiction account of pre-Britain Anglo-Saxon ruling family in the 800’s during the time of invading Danish “Norsemen” or Vikings from present day Sweden, Holland and Norway. Author Benjamin Merkle used his research to provide detailed descriptions of ruling class and peasant farmer challenges to survive not only the toil of land into harvest bounty to last the winter but to defend, defeat and eradicate invaders in longboats. This historical account accurately reveals the weaknesses of geography, infrastructure and practices of the period, how the Vikings took advantage of all of them, and how one defeated ruler in exile used his wits and wisdom to outwit, mobilize locals, raise and army and navy, inspire, educate and lead his country from a collection of conquered near-extinct city-states and regions into a single unified Britain within two generations.

This incredible story is not only engaging because it is true and Merkle supplies photographs, a handy chronology at the front and a map; but also because anyone with Anglo heritage or a natural instinct to root for the picked-on underdog can identify with the messages of the power of faith and perseverance, the values of courage and leadership and the tenacity of defending your homeland so common in human history.

The writing style is replete with many dates, locations and names but woven into the drama with enough detail and a few photographs from his solid research that it becomes clear, with a mental picture of their daily life and times that you cannot get in a school history book. When you can visualize the characters akin to a novel, this pagan verses Christian history becomes interesting, alive and engaging, and very easy to read.

Personally, I could quite easily identify with the paternal and protective instincts of the main “characters” in this real life drama of 11 hundred years ago. I found myself shocked that I had no recollection of hearing about Alfred the Great from elementary school history but did remember those nasty conquering Vikings that are more often glorified (sorry Minnesota football fans). I will let the sociologists explain why pirates are idolized…

One thing I did enjoy from the book very much was learning about the roots of our street layouts, the need for a national army and navy, the bravery of a king that locked arms with his men in a life-of-death shield wall, even the first required government literacy program. Other uniting principles originating with King Alfred during his 28-year reign were books in the local language, a strong currency and simplified common laws. What I discovered about myself was that my ancestors in Europe had a very hard life, must have lived through this terrible time and passed onto me in my genes a strong spark of survival that I can call upon if I ever need it. If you enjoy those misfits-become champions sports stories you will love this epic.

I can say that I did finish wanting to read more about the next generation of Alfred’s children and their further success, more about life in the other European countries impacted by the Vikings, and maybe even what it was like to be part of the Viking culture as a trained brigand to leave his home and family expecting to return laden with gold only to find a dug-in band of farmers that refused to budge. I found nothing to dislike about the book and would like to see it unfold as an epic movie or mini-series, even a Discovery show with many more photographs. I easily recommend this book to others who enjoy history and dramatic biographies, those who have traveled to Great Britain or have ancestry from the region, or anyone who likes a great story.

Disclosure of Material Connection: I received this book free from Thomas Nelson Publishers as part of their BookSneeze.com

by Roland LaMothe
Posted by Sharon LaMothe at 3:37 PM No comments: