Making Babies: The Definitive Guide to Improving Your Fertility and Reproductive Health by Jason Jackson N.D. ~A LaMothe Book Review 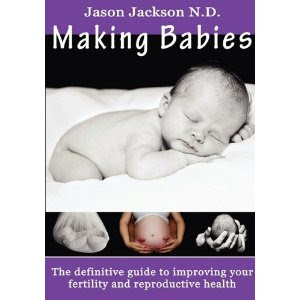 Some books that come to me in the mail don't hold much of a surprise for me. They are just what they seem, at least if you judge the book by it's cover. Making Babies: The Definitive guide to improving Your Fertility and Reproductive Health by Jason Jackson N.D. certainly has a lot more to offer then I expected. To start, Jason Jackson runs a successful Natural Medicine practice from Brisbane, Australia. He has lectured and consulted extensively on numerous health topics throughout Australia and overseas. Mr Jackson specializes in reproductive health and infertility and is recognized as one of Australia's leading Naturopaths in this area and is an authority in the field of Clinical Nutrition and Herbal Medicine.

The introduction is what really captured my attention: "Over the thousands of years that humans have been able to reproduce, it has been only the last fifty years or so in the industrialized world, with its nutrient-depleted foods, genetically engineered agriculture, chemical processing, drugs, radiation and pollution, that we are now observing massive impacts on our ability to bear offspring, particularly in affluent Western societies." The last fifty years?

With chapters on Male and Female Reproductive Overviews, Preparing for Conception, Stress and Fertility, and yes, Medically Assisted Reproductive Technology (which is considered 'Plan C') I found that Jason Jackson was very adept at covering everything that one would need to know to do just that, Make Babies.

What I was really happy about were the detailed black and white photos depicting not only the human anatomy but also of fibroids, PCOS, IVF Procedure and quite a few more that add value to each chapter.

I recommend Making Babies The Definitive Guide to Improving Your Fertility and Reproductive Health by Jason Jackson N.D. for your office to be used as an infertility/fertility resource guide.
Posted by Sharon LaMothe at 1:53 PM No comments: